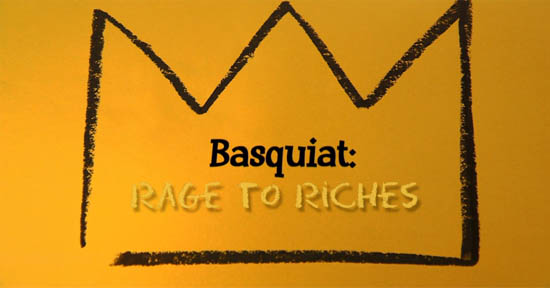 Basquiat: Rage to Riches by American Masters disregards its origins but brings us closer to its friends and intimacy.

In the documentary we listen first hand to his collaborators, friends, lovers, gallerists and family. Jean-Michel Basquiat is an artist born in New York who had a short but intense career and fame in which he produced thousands of paintings in a period of ten years, he was American but of Puerto Rican and Haitian parents.

It is in this last aspect that the document fails to explore more deeply its roots and influences (that of both cultures), something that is unfortunately useless and customary, but deserves its importance as an African-American artist in the complexity of American racism and white culture Of art. It seems to me that Basquiat looked like a complex trinity that grouped all that hodgepodge of influences and embraced the contradictions to be authentic. This deserves to be explored more widely.

However, the importance is ignored again and it is relegated to the simple mention of his mother, Matilde Andrades, a graphic designer of Puerto Rican descent who encouraged her son to take an interest in art, as well as the opportunity to unravel for the general public again. variety of writings in Spanish (or French) in his works as in the titles of his pieces.

In his works we can see phrases and titles such in spanish as: para morir, sangre, parásitos, boricua, mujer, el gran espectaculo, pecho, oreja, arroz con pollo ( to die, blood, parasites, boricua, woman, the great show, chest, ear, rice with chicken) and hundreds more who claim to be receiving more attention and locate their references and importance

As well as this opportunity is lost, it was also possible to expand on the texts that make up his paintings, which sometimes, as he himself indicates, come from the public discussions of the time, his philosophical interests and which are in sync with literature and the movements of vanguard of the twentieth century. In basquiat I perceive it as mantras that are corrected as the unity of purpose in painting is achieved.

Excellent pietajes with interviews that show us the intellectual depth of the artist even with his communication problems (gaga) or shyness, can be seen in this documentary and mainly the responsibility and intention that he had regarding many of his public expressions. On more than one occasion it is seen correcting or expanding ideas of the art world for the non-knowledgeable public. Although there is also a presentation in which they are asked, Is there any anger in you, some anger in your work? and of course he answers yes, but when asked to explain the reason for his anger he skids answering but with a confused smile.

He emphasizes his leading role in the film Downtown 81, his collaboration with Andy Warhol and all the gallerists who managed his work. Interestingly, it is not in the film at least with an interview the artist and film director Julian Schnabel who made the film about his life, who like Basquiat lived the intense fame although a little earlier in the eighties.

In an earlier post titled Claiming Basquiat for Puerto Rico I have insisted on highlighting his Puerto Rican heritage and asked: What does Puerto Rico expect to claim one of its own and bring it to the Caribbean?

Here you can watch the documentary Basquiat: Rage to Riches